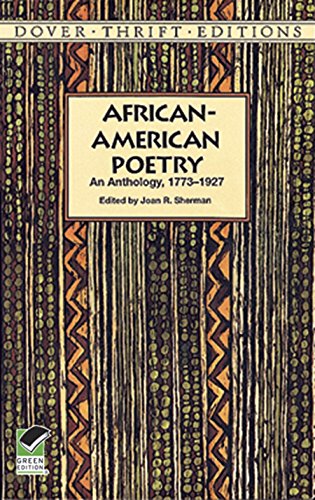 African-American Poetry: An Anthology, 1773-1927, is a slim volume which gives a taste of the African American experience from the dawning of the Revolution to the heyday of the Harlem Renaissance. There are many fine pieces found within, and it is interesting to see the attitudes change over time, such as when Phillis Wheatley, an eighteenth-century slave, expresses gratitude for have left Africa to learn about Christ (“On Being Brought from Africa to America”), gives way to Langston Hughes’s romanticism of his ancestral roots in the continent’s past “The Negro Speaks of Rivers”).

The only grievance which I can muster lies in a lack of notation that may have given many of the poems their proper context. This is especially so in the many dialectical poems where frames of reference would have been helpful. In particular, James Edwin Campbell’s “The Cunjah Man” was so dialectically dense that I had to read it several times to get even a sense of what the subject was. As it stands, I am not sure the “Cunjah Man” is a hoodoo conjurer, the Devil, or something entirely unrelated.